In this episode I’m joined by JV Crum III.  JV is the founder of ConsciousMillionaire.com and the host of multiple podcasts that have over 12 Million listeners in 190 countries.

He knew at the age of 5 that he was going to be a millionaire.  And while the number didn’t really matter, it was more a belief that he would be consciously wealthy, abundant and limitless.  When that day came at the age of 25 when he became a millionaire, he had a meltdown a year later when he realized something was missing.

We dove deep into the topic of mindset and spirituality in this podcast. And, he shared why “finding his purpose, living it and surrendering” were the keys to him finding true happiness and fulfillment.

Speaking of which, JV is hosting an upcoming masterclass where he’ll be teaching the 7 Money Mindset Secrets Conscious Millionaires Use To Unlock More Income 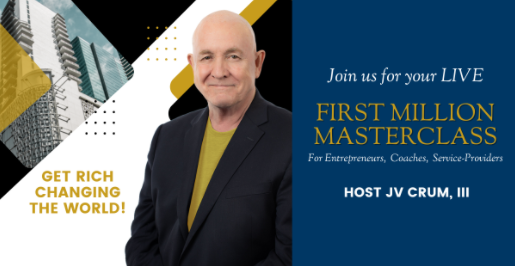 3:00 | Why I decided to invite JV to my podcast 24 hours after meeting him
5:39 | JV explains how he created the Conscious Millionaire in a hot tub
11:42 | Why JV didn’t hesitate when he was called to create Conscious Millionaire?
13:42 | JV talks about why he refused to believe at age 5 that money was bad
20:16 | Why do people stay in the “scarcity box”?
30:50 | How do you create limitless abundance around the world?
35:42 | The questions JV asked me that had me pondering how I can become a billionaire
39:38 | How to quick shift from scarcity by trusting “perfect timing”
46:16 | How to be in control of “flow” any time and any place you want
50:56 | How the “First Million Masterclass” is your first step to creating your dream life
52:43 | What is the ONE thing that you are most grateful for right now
53:58 | Why JV believes he may never attend or host in-person events ever again
59:57 | Why creating the life that you’ve always dreamed of is only 1 choice away

“You know what’s interesting is to watch how the mosaic of life comes together, where I don’t have to do anything to make it come together.  I just have to surrender to allow myself to notice that it’s coming together. Life is so magnificent.” – JV Crum III

“I wanted to feel I had control over everything.  Where I could strategically and tactically attain my desired result. I dove deep on vision and said….here’s the plan!  And, it just never, ever worked out like that. It wasn’t until I surrendered to whatever is that it all started to come together.” – Trevor Turnbull

“The Conscious Millionaire came to me in 2004 in a hot tub in Reno, Nevada. I was reading this Green Festival brochure in the hot tub and saw the word – Conscious. My intuition is very visual. In my mind’s eye I saw Conscious Millionaire. At that moment I knew this is why I’m on the planet.” – JV Crum III

“You can’t just show up, hope and pray that something is going to come to you. You have to still put in the work and be intentional about it. But, surrendering to the idea that the universe is choosing you for something and now it’s whether or not you are going to see it at the time you are supposed to, or if you are going to have these blocks that will stop you.” – Trevor Turnbull

“I remember at age 5 when it hit me standing beside the kumquat tree.  I said – I know, I’ll be a millionaire when I grow up. I ran in the house as though I had discovered water.  My mother shook her finger at me and said – don’t you tell anybody. My mother believed that if you had that much money you must be a criminal.” – JV Crum III

“Most mindset books start and end on beliefs. And, that’s just the surface level, even though it’s important. Our job is to shift to living in a world where a lot of our beliefs are around limitless abundance.” – JV Crum III

“I can assure you that if you and I are doing business and I’m focused on you winning and humanity being better off, I will absolutely do better.” – JV Crum III

“Me and you talking right now…that’s what inspires me. I know that one of my gifts is to amplify the voices of the change makers of the world. I took me a long time to actually even own that. And, that’s why this podcasting game is so amazing.” – Trevor Turnbull

“When you change the narrative around how people think, and what’s possible…and all of a sudden you start thinking of solutions to end world hunger and how to provide clean drinking water and sanitation systems.” – Trevor Turnbull

“Everybody likes to make sales. But sometimes people cancel. Some of those people do not reschedule. Here’s what I want you to know…they were never going to buy in the first place. They just gave you an hour of your time back. Use it wisely.” – JV Crum III

“Sometimes not being busy like you used to or not having everything align for you in the way that you thought it was going to is the greatest blessing that you have…if you choose to actually slow down and embrace it as opposed to…how do I go fill the void.” – Trevor Turnbull

“When I was 5 and decided to be a millionaire…I had no clue how that was going to happen. But, I had no question that it would.” – JV Crum III

“Uplifting humanity isn’t just about getting water to everybody.  It’s about uplifting the spirit of people.” – JV Crum III

“I’m 46 right now and I’ve been an entrepreneur for 20 years and I’ve seen people that used to say – you’re crazy – to them – wow, aren’t you lucky. I’m like, come on man…lucky…I made choices 20 years ago that got me to this place.” – Trevor Turnbull

Listen To The Podcast

Latest Episodes
Please select which of the following best describes you:

I AM A SOLOPRENEUR

I AM A BUSINESS OWNER

looking for a proven client
acquisition system to grow
my business.
Yup..That’s Me!

I AM A SALES TEAM LEADER

looking to empower my sales
team with virtual selling
strategies.
Yup..That’s Me!

“Looking for a speaker for your event? Please fill out the form below to get in touch so I can learn more about your needs

Want to ask me a question? Fill out the form below to get in touch so I can learn how to best support you!